Swing It Like Sarfaraz – Understanding the Secrets of Reverse Swing

Ball texture, seam position, that coveted 90mph+ benchmark. What exactly is the physics of swing bowling?

It’s surprising to learn how many fundamental, everyday things around us were discovered by accident – penicillin, corn flakes, and the color mauve amongst them. However, Test cricketer Sarfaraz Nawaz (or cricketing great Imran Khan or Punjab CC player Salim Mir, depending on who you ask) stands apart from Alexander Fleming, Will Kellogg, and an 18-year-old William Henry Perkin, in terms of both the manner of the discovery and the nature of the find.

Yes, reverse swing was similarly not actively searched for and was stumbled across unintentionally, but the evolution of bowling means its discovery was inevitable. There is a simple linearity to how new bowling tricks and skills came about in the early days of cricket. Even without speed guns to quantify their deliveries, bowlers would try and bowl faster and faster, mentally cataloguing the change in the ball’s behavior. They would take note of how it would deviate differently as the match progressed and overs ticked through.

It is not surprising, therefore, that eventually, someone noticed that bowling at certain speeds, with certain conditions and treating the ball a certain way, caused it to do the exact opposite of everything they’d seen before.

The standard cricket fan sees the red streaks on Test whites, sees fielders lick their finger and smooth it over the ball before passing it on, sees Steve Smith giving tearful press conferences and Shahid Afridi chomping the ball like an apple, and can tell you swing is about the texture of the ball’s surface. Rough and smooth, the wind moving with different velocities on either side of the seam, swing more easily extricated from the dry, rough, and dusty subcontinent pitches; all trivia that a keen watcher will know.

The full mechanics of the phenomenon, however, are less known and understood, notoriously shrouded in mystery, unknown by probably even the bowlers most skilled in the art itself. Commentators will allude to factors like cloud cover and humidity, might make vague reference to seam position and bowling action, but rarely are able to give anything more concrete than a hand-wavey explanation, often not even fully accurate.

A rudimentary understanding of some of the phenomena in fluid mechanics is required to follow the mechanics of even simple swing bowling. Fluid flow around any body will always endeavor to follow its contour, regardless of its viscosity. In fact, intermolecular forces between the fluid particles and the surface due to the fluid’s viscosity result in the particles in direct contact with the surface sticking to it. The fluid particles just above this immediate layer will collide with these and therefore slow down; the further away the particles are from the mass, the less this effect is seen. The thin layer of fluid surrounding the body where this effect of viscosity on the fluid speed occurs is called the boundary layer, the behaviour of which is fundamental in understanding the behaviour of any body in a real fluid. The texture of the surface can help dictate the state of fluid within the boundary layer and can be understood instinctively; a smooth surface results in a smooth and steady laminar flow while a rough surface causes an irregular and chaotic turbulent flow.

Another major factor that affects the boundary layer is the changing pressure of the fluid at various points around the body; downstream, there is an adverse pressure gradient when the fluid pressure begins to increase and therefore decelerates the fluid. The pressure can increase to such a point that the boundary layer’s velocity relative to the surface becomes zero and then reverses direction. The flow reversal means the fluid no longer follows the shape of the body, and the boundary layer separates from the surface. The exact point where the detachment occurs is called the separation point, and it is the location of this around the body that has such a marked effect on the trajectory of the ball. 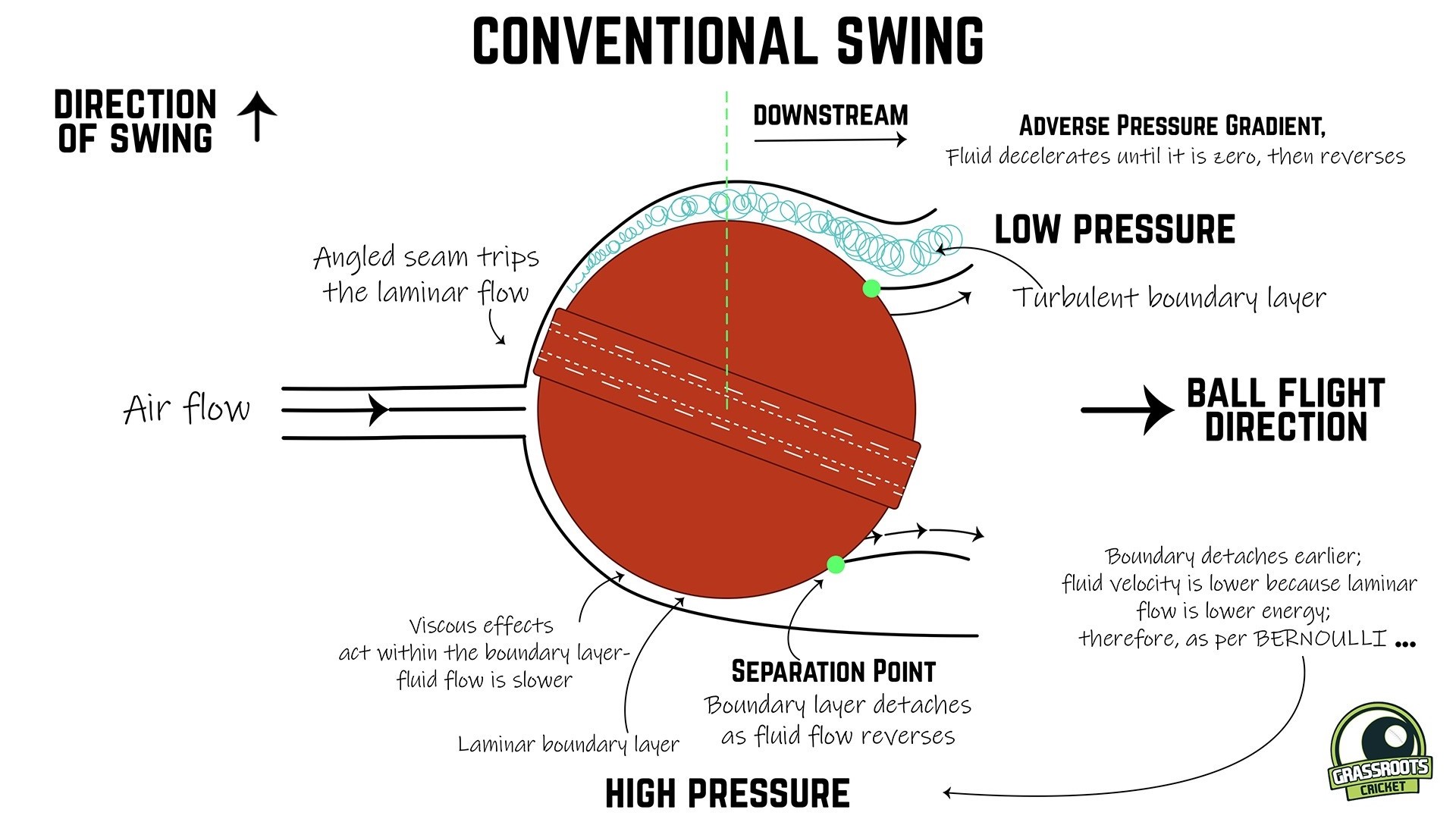 Conventional swing, extricated from new balls bowled between 30mph and 70mph, is relatively simple to understand and has been studied and modeled by scientists in great depth. Scientifically, swing is a net sideways force on the ball, therefore requiring a pressure difference on either side of it. This arises due to the position of the separation points; a turbulent boundary layer, by virtue of its increased kinetic energy, is able to better counteract the adverse pressure and therefore separates later than a boundary layer, which has its separation point at the apex of the ball.

It is these asymmetric separation points that give rise to the pressure difference – the later the boundary separation, the higher the fluid velocity as the boundary layer detaches, and therefore the lower the pressure as per the Bernoulli Principle. Net force due to a pressure gradient will act towards the lower pressure region. Therefore, in conventional swing, the ball’s lateral movement is in the same direction as its seam position.

Reverse swing can happen in one of two ways. At a certain delivery velocity, the laminar boundary layer will naturally transition into a turbulent one, therefore decreasing the asymmetry and hence the net force. Increasing the velocity moves the transition point upstream (i.e., closer to the bowler), and when the flow profile either side of the ball is symmetric, i.e., both sides have turbulent flow, there is no net force and therefore no swing if you are unfortunate enough to bowl at a speed of around 80mph, regardless of how textbook perfect the bowling action is. However, it is beyond this speed that physics takes us into the mysterious and murky forest of reverse swing.

For a new ball, bowled at a velocity higher than around 85mph, the transition point moves even further back; crucially, the laminar flow will transition to turbulent before encountering the seam. Now, when the seam trips the flow, momentum is imparted to the fluid particles, causing the boundary layer to thicken. A thicker boundary layer is weaker, and now although there is a turbulent flow on both sides of the ball, the seam side boundary layer has an earlier separation point. The asymmetry is therefore opposite to conventional swing – the higher pressure is now on the seam side, and therefore, the net force is in the opposite direction to the seam and that of conventional swing. 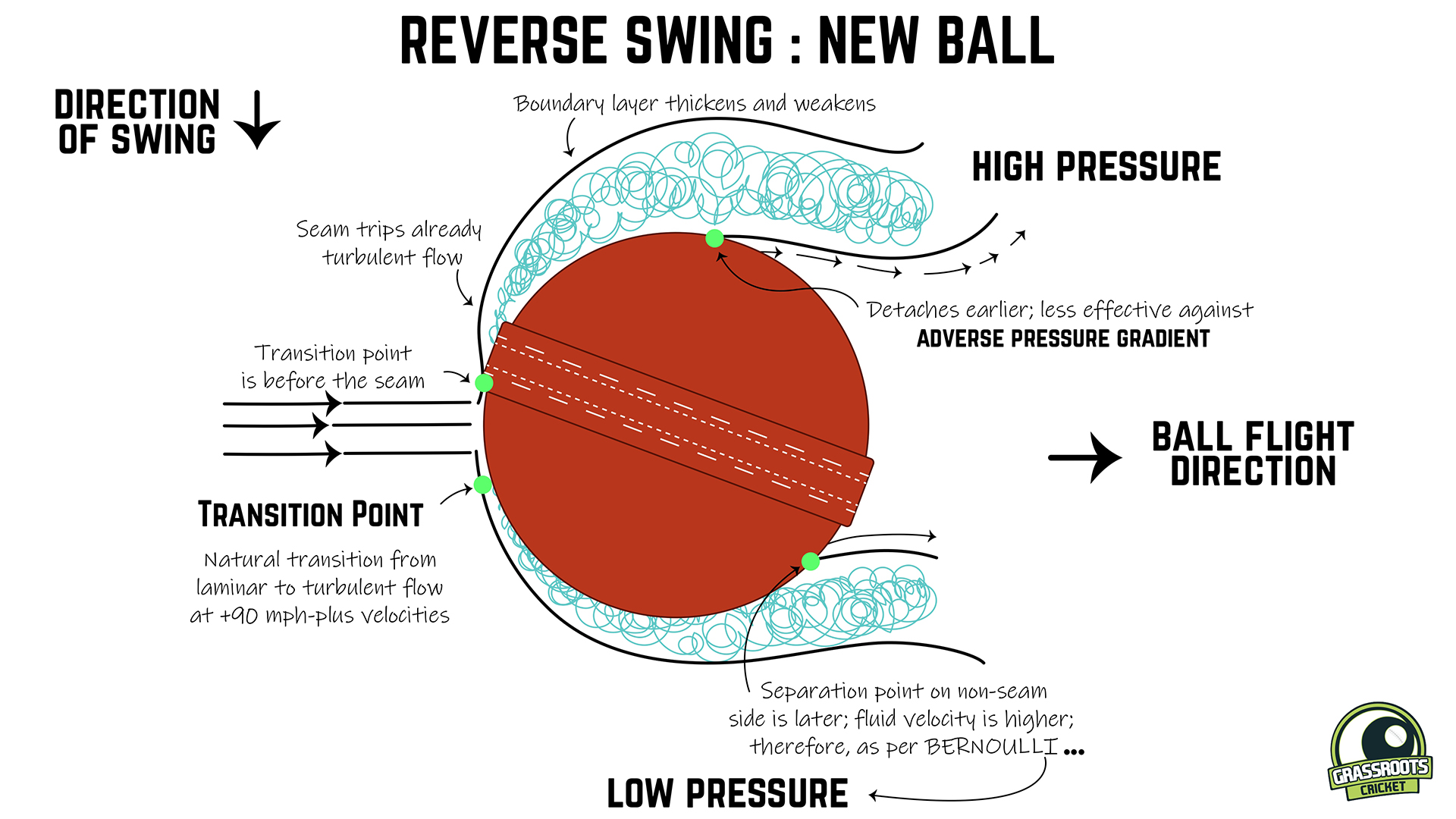 Crossing the 90mph mark is no mean feat – most mere mortals, therefore, have to take the longer route to reversing the ball and wait for it to age and scuff with use while maintaining one side of it to be relatively smoother. A rougher surface means the velocity at which the transition from laminar to turbulent flow on the non-seam side occurs decreases – reverse swing is therefore attainable at lower velocities than required to extract it from the new ball. 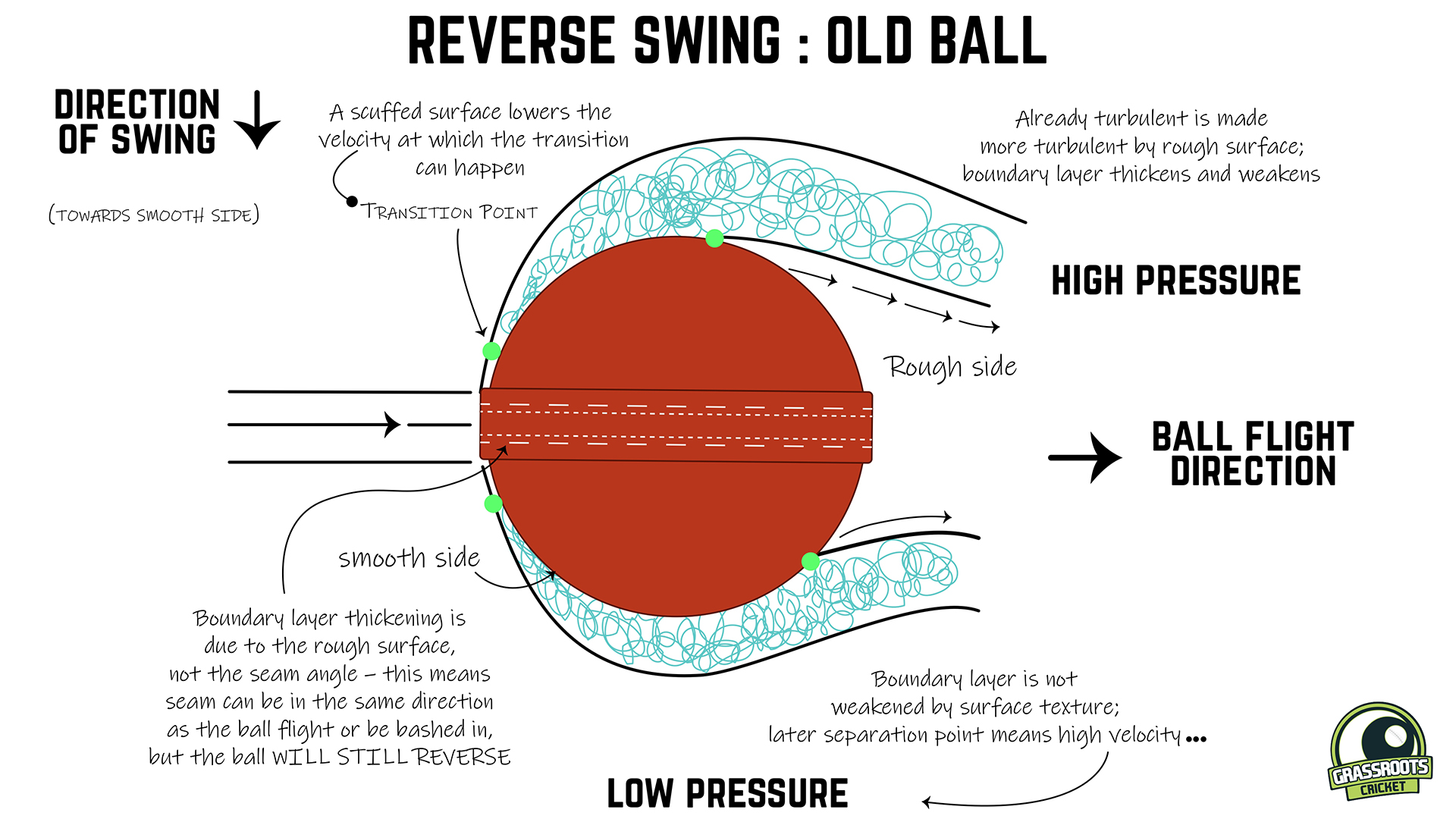 As the match progresses and the ball ages, fielders will doggedly polish one side of the ball, leaving the other free to be roughed and scuffed. The transition from laminar to turbulent is then able to happen naturally, without any input from the seam position.

From a scientific point of view, it is strange in a world of wind tunnels and high-resolution smoke photographs and technology that can quantify every parameter of a ball’s trajectory to see so much misinformation about swing bowling. In fairness, when commentators raise the lip-ribbon mic to their mouths and wax eloquently about the color of the ball, the amount of cloud cover, and perhaps most ludicrously of all, the operation of floodlights, as factors for fast-bowlers to watch out for, its unsurprising that watchers begin to parrot these lines back too.

The pacers themselves may be less concerned with the physics of airflow and learning the ins-and-outs of the behaviour of the boundary layer – it’s one thing to measure the behaviour of a ball in a laboratory setting but another to execute a bowling plan in front of a roaring crowd and a hungry, willow-wielding batsman. The grasp of cricketing old-wives tales is hard to shake; there are too many anecdotes that watchers can stubbornly give reference to, to argue that actually, it did swing more on that cold and cloudy day in the second session at Headingly.

Most importantly, sports is about instinct and the weightless hand on your shoulder nudging you to follow your gut and be unorthodox and those elusive and unquantifiable states of being in rhythm and in a groove. But reverse swing bowling is just as much a game of separation points and pressure gradients and churning airflow, and it’s about time even the casual cricket watcher understood that.

wow this is great.